Art at the Heart of Education: My Interview With NPR

I recently had a chance to sit down with Jackie Lyden of NPR to discuss The Curators of Dixon School, and the amazing things that happen when art is at the heart of education. You can listen on NPR’s website, or read the transcript below.

Copyright © 2012 National Public Radio. For personal, noncommercial use only. See Terms of Use. For other uses, prior permission required.

On Chicago’s South Side, the Dixon School is something different from the image of inner-city public schools in minority neighborhoods. The halls are lined with museum-quality African-
(SOUNDBITE OF MOVIE, “THE CURATORS OF DIXON SCHOOL”)American sculptures and paintings along with the lockers. It looks like a fantastical gallery.

UNIDENTIFIED WOMAN #1: We walked in here, and by the time we walked out, all I could think of is: Why wasn’t school like this when I was in school?

LYDEN: That’s a clip from the documentary, “The Curators of Dixon School,” which takes us behind the walls of and into the lives of artists and students at the school. Pamela Sherrod Anderson is a Chicago native and former journalist who spent the last two years working on her documentary. Roger Ebert gave her film three stars over the weekend, and she joins us now to talk about the film, which premiers at the Black Harvest Film Festival in Chicago this week.

Pamela Sherrod Anderson, thanks for being with us. 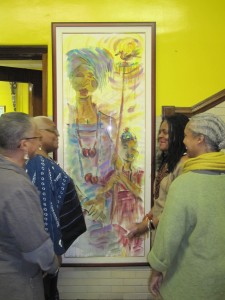 LYDEN: I have to tell you, I agree with the clip we just heard. I would run into a school like this if I were a child again. We’re talking about hallways where mosaics surround the water fountains, where sculpted African heads peer out over the lockers. A whole series of paintings on Dr. King’s civil rights struggle and, of course, abstract paintings, as well. This is an inner-city public school.

ANDERSON: Yes, it is. Smack-dab in the middle of Chicago.

LYDEN: On the South Side.

ANDERSON: Yes. And, usually, when you hear stories about the South Side of Chicago, they are not the kinds of stories that deal with beautiful artwork and children who are happily learning.

LYDEN: Well, in fact, Chicago’s been in the news for other things this summer, and we’ll get to that – for violence. But tell me how you became engaged with it, and how is it that Dixon School exists? It’s been doing this for about a decade now.

ANDERSON: By chance, I was sitting next to a gentleman at a dinner party, and he had finished writing a book on collecting African and African-American art. And, as we were talking, he said, you know, if you really are interested in African-American art and the collecting of it, you should check out this school on the South Side.

And I did. And when I visited the school, I saw more than 200 works of art, from oils and water colors to pastels and textiles and sculptures and beautiful mosaics. It took my breath away, all the color and the texture, and to see all of this not within a military-like, secured environment. It was just like you would go into an art gallery and see it. And the children very much own the art as their own collection, and they really respected it, because nothing was nailed down. There were no metal detectors for you to go through.

LYDEN: So, now, this collection, Pamela, this is the brainchild of the founder of the collection and the principal, a woman named Joan Dameron Crisler. Yes?

LYDEN: Let’s hear a clip from her.

(SOUNDBITE OF MOVIE, “THE CURATORS OF DIXON SCHOOL”)

JOAN DAMERON CRISLER: And so I wanted the kids to be free to interact with the art. I wanted them to feel honored that we would put such richness, things of such value in their midst and trust them to honor and respect it. And they have not disappointed me.

LYDEN: So, of all these works of art, not one has ever gone missing?

LYDEN: This is amazing. And what did the kids tell you about the works of art?

ANDERSON: They feel that if they would walk through the school and it was no longer there, they would miss it. And, as a matter of fact, when they visit other public schools and they don’t see the same type of environment, they say it’s boring. Where’s the art? Why does it look like this?

LYDEN: So one of the things the educators have learned is that it enhances everything, not just art appreciation.

ANDERSON: Exactly. Exactly. And, as a matter of fact, they’re not just beautiful pictures on the wall. They use the artwork that’s there in the collection as part of the curriculum, really part of the daily lesson plan with the children. 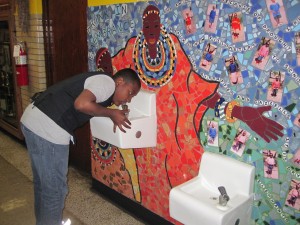 LYDEN: Explain, please, Pamela, how the teachers get the kids to interact with this art – and not only the teachers, the parents. But let’s start with the kids.

ANDERSON: One of the ways they do that certainly is in the class structure. You have assignments that focus on the lesson that they’re learning, and they also bring in different themes from the artwork throughout the hallway. The first floor of the school really is geared more toward children who are at the early primary levels, and the artwork is associated with each level that the children are in.

So from pre-K to about fourth grade, you have those works of art that would be most attractive to them. As you get up to the seventh and eighth graders who are about to leave elementary school and go on to high school, you have works that are a lot more challenging in terms of showing pictures of life that are sometimes very difficult to deal with. And they work that into the lesson in terms of essays that are written in the language arts classes and an actual art class. They work on pieces of their own art to express how they’re feeling and what they are going through, what’s happening in the news and current events. So they always find a way to bring it into the picture. They use it in mathematics classes and in science, as well.

LYDEN: If you’re just joining us, this is TELL ME MORE, from NPR News. Michel Martin is away. I’m Jacki Lyden. And we’re talking about the film, “The Curators of Dixon School,” with Pamela Sherrod Anderson.

Pamela, in the film, you speak to the mother of a young student named Octavia, and Octavia’s mom is talking about how drastically her daughter has opened up and matured since she enrolled at Dixon. Let’s hear from Octavia.

(SOUNDBITE OF MOVIE “THE CURATORS OF DIXON SCHOOL”)

OCTAVIA: Just because you give them more…

OCTAVIA: …she’s like, I’m going to help you with your definitions.

OCTAVIA: Are you lying to me? (unintelligible)

UNIDENTIFIED WOMAN #2: We do it better than any teacher possibly could. I don’t know about Ms. Bell or Ms. Mundy. Ms. Randall, she go all out. But what we do here is we show no weakness when it comes to our student.

LYDEN: This is Octavia. She’s tutoring some other kids. But what was her arc?

ANDERSON: It’s funny. I have to laugh whenever I see that scene and hear Octavia’s voice, because she first came into the school very shy and, I wouldn’t say withdrawn, but just a very shy little girl and not as open. But you certainly see her now as a young woman very sure of herself, very confident, very good in her studies and wanting to help and to tutor her fellow students.

And, in that particular scene, there’s a young man who is not quite making the grade and needs a little help in his work, and she and some fellow students are part of a group that tutor their peers. And she’s a little tougher than the teachers.

LYDEN: You know, one wonders what kind of effect and change a school can really have. I mean, as we mentioned at the outset, we don’t always hear a lot of good news around inner-city schools in Chicago. It’s been beset by gang violence. Reports say Mayor Rahm Emanuel reads gangland violence reports first thing in the morning before he does anything else.

Is the press, do you think, are we overlooking the contributions of places like Dixon?

ANDERSON: A lot more can be done in terms of looking at schools and looking at education. And it’s important to step back and say: You know, how can I look at this story differently? For me, in going into the schools – and one reason why this story was particularly interesting is because it really showed a grassroots effort in terms of the teachers, the parents, the community, the artists all coming together and saying art is really important for our children, for learning, not because we want to make them into artists, but because it really helps them have a certain perspective on living.

I mean, when you see beautiful things, it can’t help but to lift you. And within the community, there are wonderful works of art, living works of art in the people who live there, as well.

LYDEN: Mm-hmm. And you see the teachers are really promulgating this, being patient, taking time off to come in and spend time with students. Dixon, in at least one case, is trying to make this model happen elsewhere. There’s a sister elementary school called Cone, but the challenges are tougher there. What happens when the Dixon model – when the attempt is to transplant it someplace else? 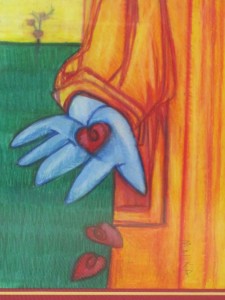 ANDERSON: The challenges are tougher, because it is in a neighborhood that is dealing with a lot more problems than the ones that you see in Dixon. But the good thing about Cone Elementary School is that they understand it’s not about copying it exactly. They understand that their community has its own personality, and they want to bring works of art into Cone and the artistic atmosphere into Cone in a way that fits the people and the children who live there.

LYDEN: Pamela, it was sobering to learn that not even Dixon – which is so famed and has had books written about it and your movie – has been spared funding cuts in the arts. I was taken aback.

ANDERSON: I’ll be very honest with you. One of the things that I’ve loved seeing in this school is that it doesn’t shake them from their focus. They stay focused in terms of what they want to do for the children, and they continue along those lines. And having the art collection is one way for them to know that art stays in the picture in that school.

LYDEN: And stays on the walls.

ANDERSON: And stays on the walls. Exactly.

LYDEN: Pamela Sherrod Anderson, it has been a real pleasure. Thank you very, very much.

LYDEN: Pamela Sherrod Anderson is the writer, director and co-producer of the new documentary, “The Curators of Dixon School.”

Copyright © 2012 National Public Radio. All rights reserved. No quotes from the materials contained herein may be used in any media without attribution to National Public Radio. This transcript is provided for personal, noncommercial use only, pursuant to our Terms of Use. Any other use requires NPR’s prior permission. Visit our permissions page for further information.

NPR transcripts are created on a rush deadline by a contractor for NPR, and accuracy and availability may vary. This text may not be in its final form and may be updated or revised in the future. Please be aware that the authoritative record of NPR’s programming is the audio.