“The Curators of Dixon School” featured on CBS 2 Chicago

The Curators of Dixon School was recently featured on CBS 2 News in Chicago. The full feature is below. You can watch the video below.

CHICAGO (CBS) – There’s a public school in Chicago’s Chatham neighborhood with no metal detectors or menacing guards, and it’s found a different way to uplift and inspire students.

It happens to be the same elementary school that CBS 2’s Derrick Blakley attended. He went back to his old neighborhood this week to see how Dixon School is perfecting the “art” of education.

From the outside, Dixon doesn’t look much different than when he attended as a student decades ago, Blakley says. But inside, the hallways feel like a museum, with vibrant paintings, dramatic sculptures and colorful murals. 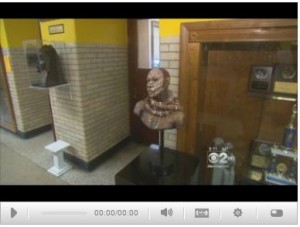 There are more than 200 pieces on display, in the midst of 600 students.

“Those works are here instead of metal detectors and guards, and you have artworks that are kind of keeping their eye on the children,” says Pamela Sherrod Anderson. “The children respect that, they really see the art as being their own.”

Anderson is director of a documentary on how art transformed education here. It’s called “The Curators of Dixon School.”

“The film is telling the story of the community, the art, the students – it all comes together,” she says.

The documentary depicts how working artists interact with Dixon students, and how art is integrated into the curriculum.

“I wanted the kids to be free to interact with the art,” former principal Joan Crisler, who started the collection, says in the documentary.

Sharon Dale is her successor.

“Our students walk around this art every day and they don’t touch it, they don’t deface it, we don’t hide it. We want them to be surrounded by art,” Dale says.

Dixon is a Level 1 Chicago Public Schools building, which means its students are performing well even though it is not a magnet school and doesn’t get to pick its students.

“The Curators of Dixon School” will be screened Sunday Nov. 25 and Thursday Nov. 29 at the Gene Siskel Film Center.